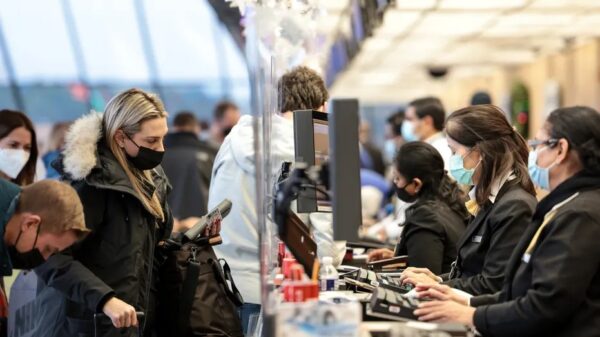 United Airlines will cut about 50 daily flights from Newark Liberty International Airport next month in an effort to reduce delays that have disrupted travelers’ plans this year.

The cuts amount to about 12% of United’s schedule in its New Jersey hub and apply solely to domestic flights, starting July 1.

United executives have said the delays are the result of capacity constraints, airport construction and air traffic control — not airline staffing shortfalls.

Jon Roitman, United’s executive vice president and COO told staff in a note Thursday that “after the last few weeks of irregular operations in Newark, caused by many factors including airport construction, we reached out to the FAA and received a waiver allowing us to temporarily adjust our schedule there for the remainder of the summer.”

“Even though we have the planes, pilots, crews, and staff to support our Newark schedule, this waiver will allow us to remove about 50 daily departures which should help minimize excessive delays and improve on-time performance – not only for our customers, but for everyone flying through Newark,” he wrote.

Related Topics:featured
Up Next

Dow Falls More Than 700 Points, Tumbling Below 30,000 to the Lowest Level in More Than a Year

A large chip factory currently in the early stages of being built outside of Columbus, Ohio, could see its scope scaled back or construction delayed depending on what Congress does with the CHIPS Act, Intel said in a statement on Thursday.

The facility was announced in January and would be the most significant expansion of U.S.-based semiconductor manufacturing in years. Intel estimated the plant could cost as much as $100 billion and committed an initial investment of $20 billion.

“We are excited to begin construction on a new leading-edge semiconductor manufacturing plant in Ohio and grateful for the support of Governor DeWine, the state government and all our partners in Ohio. As we said in our January announcement, the scope and pace of our expansion in Ohio will depend heavily on funding from the CHIPS Act,” an Intel spokesperson said in a statement.

“Unfortunately, CHIPS Act funding has moved more slowly than we expected and we still don’t know when it will get done. It is time for Congress to act so we can move forward at the speed and scale we have long envisioned for Ohio and our other projects to help restore U.S. semiconductor manufacturing leadership and build a more resilient semiconductor supply chain,” the statement continued.

The Biden administration has hailed the Ohio factory as an example of the administration’s efforts to increase manufacturing capacity in the U.S. Intel CEO Pat Gelsinger was a guest of Biden’s at the State of the Union earlier this year.

“If you travel 20 miles east of Columbus, Ohio, you’ll find 1,000 empty acres of land. It won’t look like much, but if you stop and look closely, you’ll see a ‘Field of dreams,’ the ground on which America’s future will be built. This is where Intel, the American company that helped build Silicon Valley, is going to build its $20 billion semiconductor ‘mega site’,” Biden said in the speech.

Most manufacturing of high-end chips currently takes place in Taiwan and South Korea, and U.S. officials have said that increasing the amount of semiconductors fabricated on U.S. and European soil is important for national security.

This is breaking news. Please check back for updates.

The Supreme Court on Thursday struck down a New York state law requiring applicants for a license to carry a gun outside of their homes to have a “proper cause” to do so, saying it violated the Second Amendment of the U.S. Constitution.

The 6-3 ruling in the case is a major victory for gun rights advocates who had challenged New York’s restrictive law, which makes it a crime to carry a concealed firearm without a license.

It also represents the Supreme Court’s biggest expansion of gun rights in more than a decade — and casts doubt on laws in eight other states and the District of Columbia that restrict concealed-carry permits in ways similar to New York.

The Supreme Court’s six conservative justices voted to invalidate the law, which has been in existence since 1911. Justice Clarence Thomas wrote the majority opinion in the case, known as New York State Rifle & Pistol Association Inc. v. Bruen.

The court’s three liberals voted to uphold the law. Justice Stephen Breyer wrote a dissent to the ruling.

In his majority opinion, Thomas wrote that New York’s law violated the Constitution’s Fourteenth Amendment — which says citizens have a right to equal protection under the law — because it “prevents law-abiding citizens with ordinary self-defense needs from exercising their right to keep and bear arms” as authorized by the Second Amendment.

The ruling comes weeks after mass shootings at a Buffalo, New York, grocery store, and another in a Uvalde, Texas, elementary school, reignited a national debate about U.S. gun laws.

President Joe Biden said he was “deeply disappointed” in the ruling, which he argued, “contradicts both common sense and the Constitution, and should deeply trouble us all.”

Citing the “horrific attacks in Buffalo and Uvalde,” Biden urged states to pass “commonsense” gun regulation “to make their citizens and communities safer from gun violence.”

Hochul said that because “the federal government will not have sweeping laws to protect us … our states and our governors have a moral responsibility to do what we can and have laws that protect our citizens because of what is going on — the insanity of the gun culture that has possessed everyone all the way up to the Supreme Court.”

New York City Mayor Eric Adams said, “This decision has made every single one of us less safe from gun violence.”

The case was brought by the New York State Rifle & Pistol Association and two of its members, Robert Nash and Brandon Koch, whose applications for concealed-carry handgun licenses for self-defense purposes were rejected.

New York Supreme Court Justice Richard McNally ruled that neither man had shown proper cause to carry guns in public because they failed to demonstrate that they had a special need for self-protection.

The plaintiffs then challenged that denial in a federal court in New York. They argued that the state law governing concealed-carry licenses, which allows them only for applicants with “good moral character” who have “proper cause” to carry guns outside the home, violates the Second Amendment.

After a federal judge in New York dismissed the case, the U.S. 2nd Circuit Court of Appeals affirmed that judgment. The U.S. Supreme Court then took the case.

Thomas, in his majority opinion, wrote that New York’s proper-cause requirement, as it has been interpreted by state courts, was inconsistent with the “Nation’s history of firearm regulation.”

“A State may not prevent law-abiding citizens from publicly carrying handguns because they have not demonstrated a special need for self-defense,” Thomas wrote.

But Breyer, in his dissent, wrote, “Only by ignoring an abundance of historical evidence supporting regulations restricting the public carriage of firearms can the Court conclude that New York’s law is not ‘consistent with the Nation’s historical tradition of firearm regulation.”

Breyer also wrote, “Many States have tried to address some of the dangers of gun violence just described by passing laws that limit, in various ways, who may purchase, carry, or use firearms of different kinds.”

“The Court today severely burdens States’ efforts to do so.”

Dow Falls More Than 700 Points, Tumbling Below 30,000 to the Lowest Level in More Than a Year

The Dow Jones Industrial Average tumbled below the key 30,000 level on Thursday as investors worried the Federal Reserve’s more aggressive approach toward inflation would bring the economy into a recession.

The Dow had rallied on Wednesday after the Fed announced its largest rate hike since 1994, but reversed those gains and then some on Thursday, tumbling to the lowest level since January 2021.

The major averages entered Thursday’s session down 4.7%, 6% and 6%, respectively, for the week and well below record levels.

The S&P 500 and Nasdaq Composite are both in bear market territory, down roughly 23% and 34% from their all-time highs in January and November, respectively. The Dow, meanwhile, is about 19% below its Jan. 5 all-time intraday high.

“The Fed has a very tight needle to thread here and I think investors and the market, in general, are losing a good deal of confidence that the Fed might be able to do that,” said Ryan Detrick, chief market strategist at LPL Financial. “The truth is, the Fed is probably behind the eight ball. They should have been hiking more aggressively — probably starting late last year looking back — and the market is realizing that.”

The Dow on Thursday traded below 30,000 for the first time since Jan. 4, 2021 after first breaking above that level for the first time in November 2020. That came as the emergence of Covid-19 vaccines and massive stimulus from the Fed fueled a broader market rally — led by tech shares — and took the major averages to then-record highs.

Breaking above the 30,000 mark put the Dow more than 60% above its pandemic closing low at the time. While 30,000 isn’t necessarily a technical level for the Dow, these round 1,000-point thresholds are seen by many on Wall Street as key psychological levels for the market.

Jeffrey Gundlach says he wouldn’t be surprised if bitcoin drops to $10,000

Data out Thursday further indicated a dramatic slowdown in economic activity. Housing starts dropped 14% in May, topping the 2.6% decline expected by economists polled by Dow Jones. The Philadelphia Fed Business Index for June came in with a negative 3.3 reading, its first contraction since May 2020.

“There is an astonishing level of tech selling right now,” wrote CNBC’s Jim Cramer in a tweet Thursday. “It is breathtaking to watch as sellers are sending the best techs down gigantically at 5 a.m.”

Staples stocks, known for their steady cash flows that could hold up during recessions, traded into the green or near the flatline. Procter & Gamble gained 1.6%. Colgate-Palmolive and Walmart were slightly higher.

“It’s about time we exit this artificial world of predictable massive liquidity injections where everybody gets used to zero interest rates, where we do silly things whether it’s investing in parts of the market we shouldn’t be investing in or investing in the economy in ways that don’t make sense,” Allianz chief investment advisor Mohamed El-Erian told CNBC’s “Squawk Box” on Thursday. “We are exiting that regime and it’s going to be bumpy.”

Central banks including the Fed are behind in the fight against inflation and are undergoing “a great awakening,” he added.

Markets initially liked the Fed’s plan to hike interest rates by 75 basis points and the potential of additional hikes of a similar magnitude. The Dow and S&P 500 on Wednesday snapped a five-day losing streaks and ended the session higher. The 30-stock benchmark added about 304 points, or 1%, while the S&P 500 advanced 1.46%. The tech-heavy Nasdaq Composite was the relative outperformer, rising 2.5%.

Market sentiment appeared to sour once again Thursday as central banks around the globe adopted more aggressive policy stances and investors questioned whether the Fed can pull off a soft landing.

As stocks fell, the 10-year Treasury yield resumed its massive June run on Thursday and was last trading around 3.44% after ending May at 2.84%.

Rampant inflation, which is at the highest level in 40 years, has weighed on the major averages, as have fears around slowing economic growth and a possible recession.